One of my daughter’s favorite books is “The Carrot Seed” by Ruth Krauss.  It’s SUPER old (from 1945) and incredibly simple.  It was in a box of books my mom gave me from my childhood and I honestly didn’t think it would even hold her attention.  But, like the generations of children before her, it sucks her in and gets her asking about gardening and planting her own seeds, which makes my heart happy.

There’s a lot of research that shows that children who help with a garden learn to enjoy a wider variety of foods – especially fruits and vegetables.  Which would be nice, because mine acts like I’m trying to feed her poison as soon as she sees something green on her plate.

What is it about kids and green vegetables? My husband and I both eat a ton of them, so it’s not like my kids aren’t constantly exposed to them. But, it’s almost as if they came out of the womb with an aversion to all foods green. And I know I’m not alone here.

I’ve even tried hiding the veggies in normal foods, but my 3 year old is some kind of super sleuth and she figures me out. Not even that, she then refuses to eat the pasta/smoothie/whatever the next time because she’s convinced I’m tricking her. So it’s actually making things worse, instead of better! 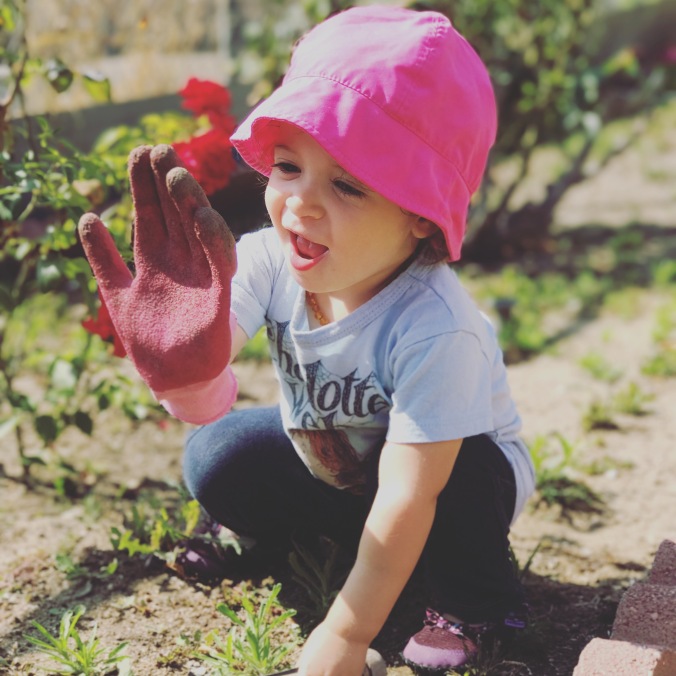 At our old house, we had a small backyard garden.  We still have a lot to learn, and we get smarter after each season, but we love going out every day and checking on our plants and how things are growing.  After our move earlier this year, one of our first projects was to get our garden back up and running.  But this time, we’re making more of an effort to bring the girls out and have them learn and help with everything.  We explain the foods, have them help with watering and weeding, and we make a big point to remind them when a food we’re eating came from our garden.  We started from seeds for the first time this year, so we haven’t gotten much food yet, but our plants are growing and we’ve gotten to pick a few treasures.

I’m hoping that their interest in our garden will help pique their interest in eating more vegetables.  They would happily survive on fruit, and only fruit, so that isn’t a problem. But, the 3 year old, especially, has a hard time with veggies.  In an effort to think outside of the box, I planted purple string beans and purple bell peppers.  They’ve grown quickly and easily and both of my girls have actually been excited to try them!  So, I feel like we’re making baby steps. 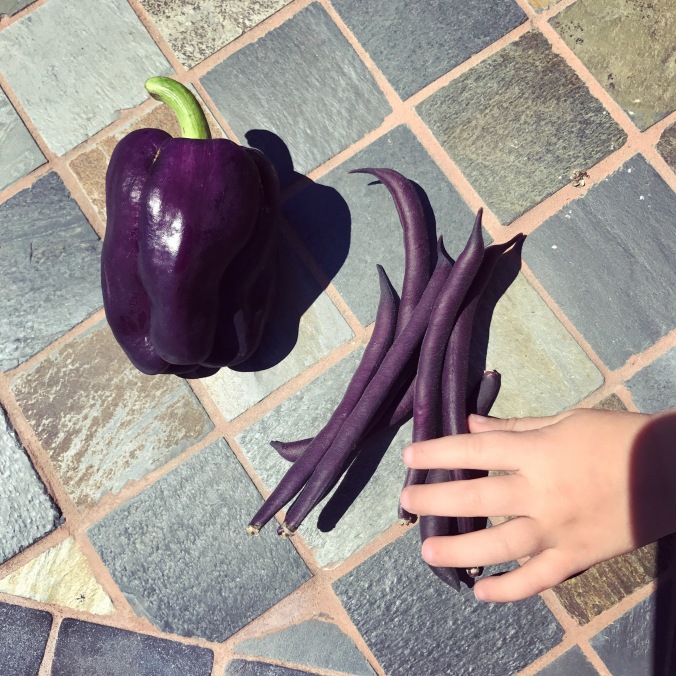 In the next couple weeks, we should have corn, tomatoes, cucumbers, eggplant, more carrots, squash and, eventually, watermelon.  Until then, we’ll continue to check the plants each day, pull up the weeds, and sprinkle water around them.  And, day by day, my little gardeners will begin to love the food they’ve helped grow.

Anything you love growing in your garden?  We’re always planning ahead and getting ideas.  I’d love to hear what you’ve tried and enjoyed!

One thought on “Cultivating a Toddler’s Green Thumb (Easier Said Than Done!)”